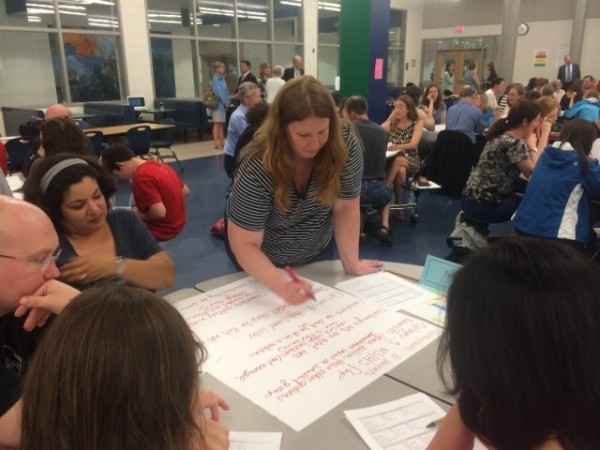 What they found there was mostly enthusiastic support, with some criticism. Most in attendance welcome the changes.

“We are unanimously for the later start times.” said Jennifer Boysko, whose daughters have gone through Herndon High. “We all have high schoolers who have suffered. I believe getting sleep is most important.”

FCPS high schools currently begin at 7:20 a.m. The proposals all have high school starting between 8 and 9:15 a.m., with various bell changes to elementary and middle schools as well. See all four proposals in detail on the FCPS website.

The proposals will cost between $2.7 million and $7.6 million to implement, mostly to purchase new buses. Last week, the FCPS school board approved the 2015 budget, but received less than expected from the county board of supervisors, had to make $97 million in cuts, and will offer employees delayed step raises.

Some parents at the SLHS meeting said they fear that existing programs will be cut in order to pay for the new arrangement.

“Money is being wasted,” said one mother of two high schoolers. “Teachers are not being paid. Classes are getting bigger. And these proposals will cost more money.”

At-large school board member Ryan McElveen said the FCPS budget for 2016 will include a 3 percent increase (about $60 million), part of which will cover the additional transportation costs.

“We have been talking about this for two decades,” he said. “Personally, I am tired of talking about it. It is time to find a solution that does not cost too much.”

While there will likely be adjustments to field and facility use, McElveen said the board is committed to keeping extracurriculars such as sports, arts and music.

What won’t happen: no change at all, said McElveen. There will be bell changes beginning in 2015-16, he said.

But that news also irritated some at the meeting, who said the county is making decisions first and gathering public opinion later.

Before the community members split up into small discussion groups, they heard from Judith Owens, director of sleep medicine at Children’s National Medical Center and one of the consultants that worked on the FCPS report.

“Delaying school start times is one of most important ways to help ensure adolescents are getting enough sleep,” she said, adding that students who start school after 8 a.m. are less likely to be depressed, get better grades, score as much as 200 points higher on the SATs and may have higher future earnings.

That was good news to many of the parents at the meeting, which was a full house at SLHS. Most of the tables working as a focus group said they were pleased the board wanted to move forward with the time changes.

There will be several more community meetings on this subject through June. The school board hopes to endorse a plan by the fall, which would give parents, day care providers and sports leagues almost a year to plan for the changes.