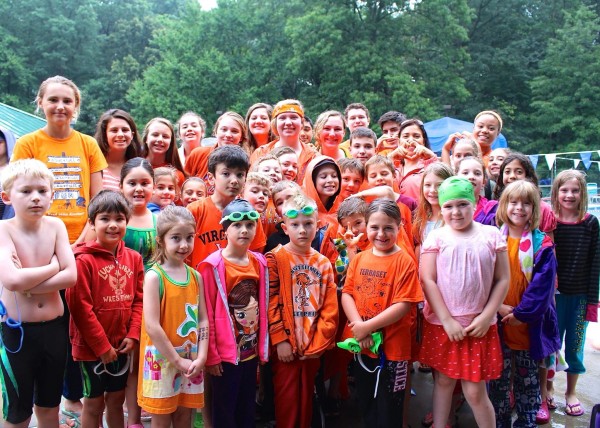 Many Reston Swim Team Association swimmers wore orange at Saturday’s meets in a show of solidarity for Dave Tremaine, the Hayfield Secondary School principal and Reston resident who died of cancer last week at age 49.

Tremaine, whose children are RSTA swimmers, had been with Fairfax County Schools since 1991 and Hayfield’s principal since 2010. In 2011, he was diagnosed with advanced colon cancer. He remained on the job through chemotherapy and radiation. He officially stepped down from his position in May, just weeks before his death. 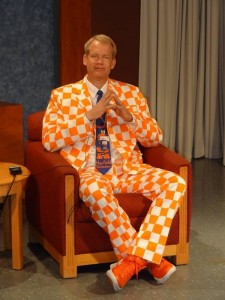 Tremaine grew up in Rockville and graduated from the University of South Carolina. He is survived by his wife, Robyn, a teacher at Herndon Elementary School, and three children: Samantha, 19, Grant, 16, and Parker, 10.

Robyn Tremaine chronicled her husband’s struggle in a blog, “Embracing the Roller Coaster.” At Hayfield, where graduation was held the day after Dave Tremaine’s death, students held a candlelight vigil for the principal.

They remembered Tremaine as a large (he was 6-foot-5 and his nickname was “Tree”) presence at the school, usually wearing orange and white, the school’s colors. Dave Tremaine’s brother, Jeff, spoke at Hayfield’s graduation.

There is no funeral planned, as Dave Tremaine hated the idea, his wife wrote on her blog. However, several memorial and fundraising sites have been set up in his honor.

Hayfield Loves Mr. Tremaine is a Facebook page started by Hayfield students, several of whom have started donations to cancer research organizations. Students have also started a petition to have the school renamed in honor of Tremaine.

“He died the day before a special class of seniors graduated: they were the first seniors to have had him as a principal for all four years of their high school experience,” the petition organizers wrote. “He never gave up on any students no matter what, and he loved the school until the end. Mr. Tremaine would almost always wear an orange article of clothing (one of our school’s colors), and he brought so much spirit and enthusiasm wherever he went. We want him to live on in places other than memory.”

Neighbors of the Tremaines in the Deepwood section of Reston have started a YouCaring fundraising site to help the family.

From the YouCaring site:

On June 16, 2014, Dave Tremaine lost a three-year battle with colon cancer. He is remembered fondly for many things: the example he set as a wonderful husband and father, the heart and soul he put into his career as an educator, his athletic talent, his impressive height…and of course, his enthusiasm for sporting the color, orange. Over the past few years, it has been made abundantly clear that Dave doesn’t just have colleagues, friends and loved ones. He has fans. He has A VILLAGE.

This village would do anything to support Dave’s incredible wife, Robyn and their thee amazing children, Samantha, Grant and Parker. While a list of of specific areas where we can help is not yet available, please consider making a donation to this fund for the Tremaine family. Whether they use that money to put toward college savings or to just keep the refrigerator stocked, this is an opportunity to help remove as much financial stress as possible during a time when the Tremaines need to focus on healing.