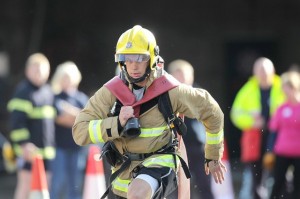 It is still one year until the World Police & Fire Games come to Fairfax County, but there is a chance to get in on the fun next weekend at Reston Town Center.

From June 26 through July 5, 2015, more than 12,000 officers from police, fire and public safety departments in 70 countries will compete in 60 individual and team sports as well as police-and-fire-specific activities, such as ultimate firefighter.

The competition is held every other year. The 2013 Games were in Belfast, Northern Ireland.

The Fairfax games will take place at 53 venues in Northern Virginia and Washington, D.C.

Reston will play a key role. Reston Town Center will serve as the Athletes Village for the event. Athletes Village is the location for registration, information, competitions, nightly entertainment and socializing with fellow athletes.

Reston will also be the venue for some of the sports competition, though details are still being finalized. Weightlifting and Honor Guard competitions will be at the Hyatt Regency Reston. Officials are also looking into a Dodgeball competition held here, as well as the open water swim and a cycling event.