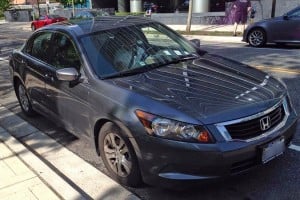 This is an op-ed from S. John Massoud, Vice-President of Dulles Airport Taxi and Arlington Blue Top Cabs.

The taxi industry in Virginia has no issue with Uber and other ride sharing apps being allowed to operate. To the contrary, we are very proud of our industry and the job that we do transporting passengers from one location to another. We fear no competition. However everyone should be concerned with the concept of Uber X.

For those of you who do not know what Uber X is, it is a low-cost ride sharing service in which a passenger calls for an unlicensed driver to pick them up in their private vehicle and is transported in that vehicle. The average Uber passenger does not really understand the inherent dangers of this system. And they are as follows:

1. Uber X drivers carry no commercial insurance, only standard vehicle insurance. Meaning that if an Uber passenger is injured while taking a trip, they will not be covered by the driver’s insurance as the driver is using his/her private vehicle for commercial purposes while not having commercial insurance. And while Uber states they have $1 million dollar insurance coverage on all of their vehicles, such insurance is not available on the open market. And Uber has not filed to be self insured under the laws of Virginia, meaning each Virginia passenger in an Uber X vehicle is being transported in an uninsured motor vehicle.  (for those of you who think I am making this up, talk to the family of the 6-year-old girl in San Francisco who was run over by an Uber X driver last year.)

2. Uber states that their Uber X drivers all must pass “criminal background checks.” Yet there is no proof of this, only Uber’s stating they do background checks.  Most likely, if Uber is doing “background checks” on Uber X drivers it is an “internet check” which only gives a very limited and incomplete check. Internet background checks often do not show many misdemeanor convictions or local code convictions. And again all that anyone has is Uber’s word that they do these checks. Unlike Arlington and Fairfax, where the Police Department gets an FBI and State check of each driver’s background showing any and all local, state, or federal convictions and or pending charges. Finger printing of potential drivers would eliminate many issues, yet Uber does not and will not do fingerprinting for Uber X drivers.

3.  Uber and Lyft were given “cease and desist” orders by the DMV only because they made no attempt to file proper licenses with the DMV. The paperwork necessary for Uber and Lyft to file is very simple to fill out and the filing fees are not prohibitive. They just refused to do so. Whether this was done for PR moves (to garner sympathy) or because of corporate arrogance is something we will never know.

4. Uber has no training program for the X drivers and as most Uber X drivers have never passed any type of test showing local road proficiency, new Uber X drivers often have no idea what they are doing. And those of you who have Garmin or a Iphone/DROID GPS know that these are not always accurate.

5. Uber is a worldwide conglomerate which has received in excess of $1.5 billion dollars from Google, Amazon  and other large entities. Where most taxicab firms are local mom-and-pop owned businesses (many of these are minority owned). If taxicab companies have any political pull in localities, it is because these businesses are locally owned and the fleet owners are active in their local communities. Where Uber is already throwing what will be massive amounts of money into Richmond to change legislation which is friendly towards them. Now I ask you, who is the bully on the block? The local mom-and-pop owned business, or the 800 lb. gorilla in the room with $1.5 billion backing them up?

6.  Uber X is now contracting with drivers who have been rejected by Arlington, Fairfax, and the Washington Flyer. Many of these drivers have been rejected for reasons from having poor driving records to having multiple misdemeanors and felonies in their background (none of which were picked up by Uber’s “background check system”).

I am not saying that our industry is perfect. And before anyone calls me a “crony capitalist” I will be the first to admit the industry needs to modernize. More and more local taxicab companies are becoming app based. No one doubts now that app based transportation is the way of the future. But do remember that Uber does not transport disabled passengers — only local cab companies do this.

Uber can transport or refuse to transport anyone it chooses, where your local cab company must take you or lose it’s right to operate. If you have a problem with your local taxicab company, in either Fairfax or Arlington or at Dulles Airport or even at Reagan Airport, and you do not like the response you get from the cab company, you can call the locality or the Airports Authority and your complaint will be heard and you will get some type of favorable action taken on your behalf.  Uber can not say that, because they have nothing governing them other than themselves.

Something on your mind? Send letters and op-eds to [email protected].