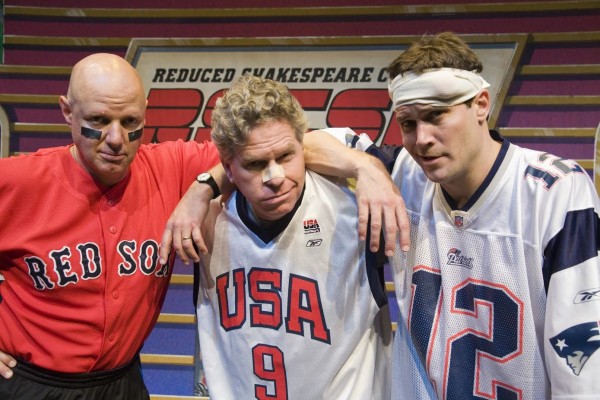 The festival will include eight performances by The Reduced Shakespeare Company, as well as a comedy boot camp and several opportunities to meet members of the well-known comedy ensemble.

The Reduced Shakespeare Company is a three-man comedy troupe that takes long subjects and reduces them to short, sharp comedies. The trio’s annual visit to RCC’s CenterStage has made them a favorite with Reston audiences, says RCC Executive Director Leila Gordon.

The “Bad Boys of Abridgement” have created nine stage shows, two television specials and many radio shows that have reached worldwide audiences.

“The Reduced Shakespeare Company has been part of the RCC arts family for more than two decades,” said RCC Executive Director Leila Gordon. “We can’t imagine any significant anniversary year in Reston that wouldn’t include sharing the hilarity they bring to the CenterStage and our community. In this extraordinary year, bringing back these shows and many original cast members is the ‘least’ we could do for their fans and fully in the spirit of ‘reducing’ us to helpless laughter.”

Tickets for the extravaganza, which begins Sept. 12, go on sale for the general public Aug. 8.

Click through for the lineup of events in Reston.

Including (but not limited to) The Ultimate Christmas Show (abridged) & The Complete Millennium Musical (abridged), songs/verses cut from other shows, readings from RSC books and radio shows – recorded live for future podcast. Wednesday, Sept. 17 at 8:00 p.m. ($15 Reston/$30 Non-Reston)

All The Great Books (abridged)

All performances are at the CenterStage, located at Reston Community Center Hunters Woods. Tickets are available online, by phone or in person.