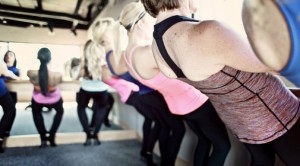 Plans to open a Pure Barre studio on Market Street at Reston Town Center have fallen through, a company spokeswoman said.

Pure Barre, a franchised exercise studio with locations nationwide, announce in December that it had signed a lease for space at 11990 Market St., on the ground-floor of the Midtown Condo.

A local rep had said the studio expected to open in February, but little action towards building out the space could be seen as time went on.

The spokesman said that “unforeseen issues with permitting in our intended space for the Reston studio,” led to the cancellation.

Barre exercise — as in ballet barre — is a recent trend where participants do small muscle movements, similar to the workouts of ballet dancers, to create long, lean muscles. Fees are $25 for single 55-minute class, but packages are available. There are nearby Pure Barre locations in Arlington, Alexandria, Bethesda, Fairfax, Rockville and McLean.