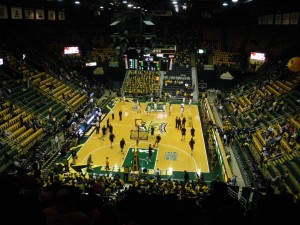 As the Washington 2024 group gets organized to make its bid for the 2024 Summer Olympics, Fairfax County may be a viable location for many Olympic venues, training centers and athlete and press housing.

The nonprofit Washington 2024 unveiled a new website and a VIP-heavy board of directors earlier this month as it seeks to be the United States Olympic Committee’s American entry for the games. Other cities in the running for 2024 are Boston, San Francisco and Los Angeles.

The USOC will choose its nominee for consideration by the International Olympic Committee in 2017. The last Summer Games in the United States were in Atlanta in 1996. The Winter Games were held in Salt Lake City in 2002.

Fairfax County Supervisor Chair Sharon Bulova says that Olympic events in the region “could be a galvanizing event,” but there have been no formal talks with county officials.

“Our board has not passed a resolution [to get involved], but if someone made a motion, it would probably pass easily,” she said. “The idea is great.”

Fairfax County will get an Olympic-style test next summer, when the 2015 World Police and Fire Games will take place here. More than 12,000 law enforcement athletes, as well as families and spectators, are expected here, says Fairfax 2015 President and CEO Bill Knight. Athletes will compete in 61 sports at 53 Fairfax venues.

Russ Ramsey, Chair and CEO of Washington 2024, is on the Honorary Board of Fairfax 2015.

Knight points out that the police games actually have more athletes and more events than the Summer Olympics. One big difference between the two is the police and fire games use existing infrastructure, while Olympics tend to build new facilities, he said.

“George Mason has some beautiful facilities,” said Knight, who managed the events that took place at University of Georgia in Athens as part of the Atlanta ’96.

“For an event like this, it is not just about competition venues, it is training venues and spectators too,” said Knight. “It takes the entire region to support the Games.”

Meanwhile, Washington 2024 has had meetings with Loudoun officials about holding equestrian events at Morven Park in Leesburg, the Washington Business Journal reported this week. The committee has also looked at potential rowing and aquatics sites in Loudoun.

Bulova adds that Metro’s Silver Line would be an added bonus for Washington 2024’s bid. The rail line is expected to be completed by 2018, finally connecting Washington Dulles Airport with Washington, D.C. and the rest of the region.

“Visitors [by 2024] will be directly served by three airports — Dulles, Reagan National and BWI,” said Bulova. “The entire region would benefit.”