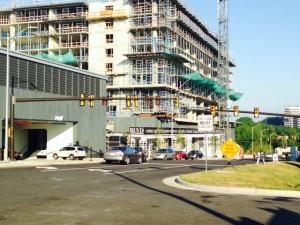 Now that Metro’s Silver Line is open, what else will open around it at Wiehle-Reston East? That will be the subject of a program at Reston Community Center Lake Anne Thursday at 7 p.m.

While there are several residential buildings in the works, no retail has yet opened at or close to Wiehle-Reston East.

Comstock is planning to eventually have about 1 million square feet of residential, office, hotel and retail space at Reston Station, which sits on top of the 3,000-space parking garage at Wiehle-Reston East.

So far, only the 10,000-square-foot retail space is completed at Reston Station. No tenants have yet signed to open there, Parker says. Eventually, that space will the lobby of the hotel.

The BLVD Apartments at Reston Station are under construction. The 22-story, 450-unit building is expected to be completed next year.

Later this year or early next year, construction will begin on Veatch’s project, a 421-unit residential building to be constructed on the site of Reston Mini-Storage.

Reston Mini-Storage, at 11405 Sunset Hills Rd., as well as an adjacent commercial strip will close this fall to make way for the new building.

The Reston Station neighborhood is essentially being built from scratch. Up until 2011, the corridor along the Dulles Toll Road was zoned for industrial and commercial use, so no people lived in the neighborhood.

Those restrictions were lifted in order to ensure future development along Sunset Hills Road near Wiehle-Reston East was mixed use, high density and transit oriented.