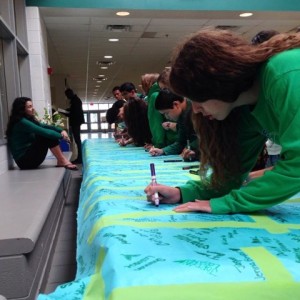 South Lakes High School’s Class of 2015 has banded together in the aftermath of the sudden death of their classmate, Emma Clark.

Emma, who lived in Oak Hill, unexpectedly died on Wednesday. The cause of death has not been released.

She had been a member of chorus groups and the South Lakes softball team, classmates said. She also held a part-time job at Life Time Athletic in Reston.

The Class of 2015 encouraged one another to wear green to school on Friday in memory of Emma. The students also signed a giant banner in Emma’s honor.

The class is planning a candlelight vigil Friday night near the Monroe Manor neighborhood where Emma lived.

Students from South Lakes and neighboring schools took to Twitter with messages with the hashtag #RIPEmma.