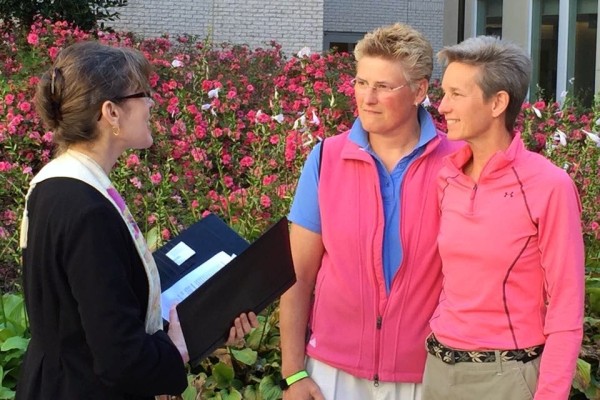 Same-sex couples were married in Fairfax County Monday afternoon after the Supreme Court denied appeals from five states — including Virginia — seeking to ban the unions.

LGBT rights supporters in Northern Virginia celebrated the decision online and at Fairfax Circuit Court as the first same-sex couple began applying for a marriage license at about 1 p.m.

SCOTUS gets it right and allows pro-marriage equality rulings to stand! Great day for justice for families in Virginia and 10 other states.

The 4110 Chain Bridge Rd. courthouse set up ropes as they expected a flood of couples to apply for marriage licenses, according to The Washington Post.

Information on marriage licenses and how to register wedding officiators had been updated on the courthouse’s website as of Monday afternoon. The court’s Twitter account gave tips on what forms to use and a reminder that cameras cannot be used inside.

Yvonne Landis and Melodie Mayo of Falls Church were the first couple to marry at Fairfax Circuit Court, the Post reported.

“I’m just really excited,” Landis said. “We always said we are waiting for Virginia. We wanted it to be legal here.”