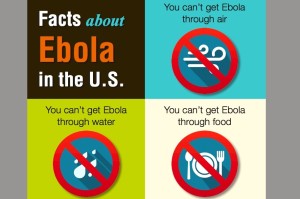 Reston Hospital Center is giving health care workers gowns and goggles, as the Centers for Disease Control and Prevention recommends, officials told WTOP. Staff will use respirator masks while in contact with people who could have the virus, and will follow World Health Organization guidelines.

Inova Fairfax Hospital will open a separate Ebola unit next week that can isolate as many as 12 people, WTOP reported. Inova Health System Chief Medical Officer Loring Flint said he was “absolutely confident” the facility could treat Ebola patients.

No cases of Ebola have been found in the Washington, D.C. region. Thomas Eric Duncan, the first ebola patient diagnosed in the U.S., had a three-hour layover at Dulles on Sept. 20, before he fell ill.

“The risk of Ebola spreading widely in the United States is low,” county officials said in a statement released Wednesday. Officials reminded residents that the virus is transmitted only by touching blood or bodily fluids of an infected person, touching contaminated objects or touching infected animals.