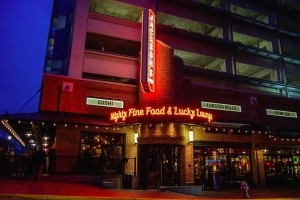 After Jackson’s Mighty Fine Foods & Lucky Lounge was named one of the top-earning independent restaurants in the country this week, Reston Now asked the owners why they think the business is such a hit.

Jackson’s familiar menu, reliable service and the spirit of its late executive chef — for whom the business was named — are key to the Reston Town Center eatery’s success, CEO Jon Norton said Friday.

“We focus really hard on our restaurants being approachable and not intimidating,” he said, referring to all 13 establishments in the Great American Restaurants group.

At Jackson’s — which opened in 2008 — customers feel equally comfortable bringing in business clients for lunch and their kids for dinner, Norton said.

The bustling, 260-seat restaurant was named in honor of chef Bill Jackson, who had amyotrophic lateral sclerosis (ALS) and died shortly before Jackson’s opened, Norton said. He was 54.

“He was a character,” Norton said. “You’d always see him looking out from the kitchen after a dish was served, around a corner so no one could see him. If [the customer] had a good reaction, he’d have a smile on his face.”

Homages to the Great American Restaurants executive chef appear throughout the dining room. The “Little Rascals” mural near the kitchen shows Jackson with the characters of the comedy (it was a fan), and the menu still includes some of Jackson’s favorites, like the French dip sandwich, Norton said.

“We like to think that his spirit is still in the place.”

END_OF_DOCUMENT_TOKEN_TO_BE_REPLACED

More Stories
Beyond Nine Lives: How to Keep Your Cat Safe on HalloweenOpen Houses This Weekend in Reston