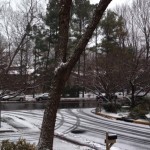 Thanksgiving week kicked off in Reston with balmy temperatures, which belies the forecast of a white Thanksgiving.

Yes, snow the day before and on Thanksgiving is a possibility, maybe even a probability, forecasters said.

It would be the first snow on Thanksgiving since 1996, says the Capital Weather Gang.

The weather will turn on Tuesday, says the National Weather Service. There will be a chance of rain between 11 p.m. and 3 a.m., then rain and snow likely. It will be mostly cloudy, with a low around 36. Chance of precipitation is 70 percent, with amounts of less than a tenth of an inch possible.

On Wednesday, one of the busiest travel days of the year, there is a 90 percent chance of precipitation with lows in the 20s. The chances for snow continue right through Thanksgiving morning.

WTOP has some advice to time your travel:

If you are headed north on Interstate 95, to get ahead of the system, drivers should aim to complete their trip (or at least make it through much of Pennsylvania) by 10 a.m. Wednesday.

If you are traveling south on I-95, I would wait until the storm system has passed, probably after 7 p.m. (or later) Wednesday.

If you are traveling along I-81, I would leave on Wednesday as early as possible (Tuesday night would be ideal), especially if you are headed south.

How much accumulation, if any, will Fairfax County see? As of Monday afternoon, the NWS was predicting up to two inches around here, but that could change.

Reston Now will bring you an updated forecast as the week goes on. Meanwhile, check your travel plans and be ready for delays.