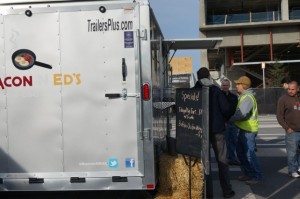 Reston Station will be hosting a Thanksgiving food truck mini-market Monday through Wednesday evenings this week.

Two weeks ago, Reston Now told you about Bacon N Eds, the truck offering all things bacon, and Wiggly Leroux, artisinal confections, being sold on the plaza by a husband-and-wife chef team.

This week, the duo will be joined by The Bratwurst King, a Restonian who has been selling Austrian goodies from his truck for several years; Meat Crafters, also offering sausage specialities; and Lobster Maneia, which has been offering its lobster at the Wednesday Smartmarket Farmers Market on Wednesdays.

The trucks will be at the Reston Station plaza on the North side of the Weihle-Reston East Silver Line Station from 4 to 7 p.m. all three days.