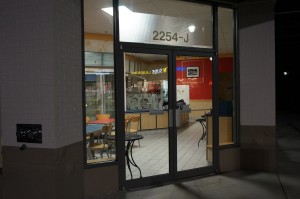 It has been nearly three months since Dairy Queen at Hunters Woods Village Center shut its doors.

The store abruptly closed in September after more than 15 years at the location. The Dairy Queen owners said that Edens, the company that owns the village center, did not renew its lease.

But the corner location is one of several vacancies for Hunters Woods, which underwent a huge facelift project two years ago.

The store’s departure leaves several vacancies in the same stretch at Hunters Woods. Two doors down, Solar Planet Tanning Studio closed in August after failing to reach a lease agreement.   The space formerly housing At Play Cafe has been vacant since 2011. The space formerly housing Lady of America Fitness is also vacant, as space in the stand-alone section that houses Unleashed by Petco and Dunkin Donuts.

A local restaurant, Chintos Burritos, had signed a lease for the space by Unleashed earlier this year, but had to back our when financing fell through.

A check of Fairfax County permits, which are necessary before any remodeling or changes can be done for an new retail space, shows nothing in the works right now for any of Hunters Woods’ vacancies.

What would you like to see go in Dairy Queen’s space? Tell us in the comments.