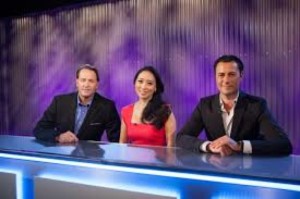 Reston food truck owner Ed Hardy did not walk away with $25,000 on Food Network’s Kitchen Inferno.

Hardy, a longtime chef and the owner of the recently opened Bacon N Ed’s trailer at Reston Station, competed in the TV contest a few months ago, before he launched his new venture here. The Kitchen Inferno episode aired Wednesday.

His goal on the show was to win the top prize of $25,000 in order to help his wife, Francoise Villeneuve, jumpstart her new confectionary business, Wiggly Leroux.

Here’s the premise of Kitchen Inferno: Contestant is challenged in three timed rounds to create a dish that will go up against well-known chefs creating the same type of dish. Contestant gets $5,000 if he wins the first round, $10,000 for the second round, $25,000 for the third round. After each round, the contestant can step off and go home with his earnings or risk losing it all.

A panel of three food experts tastes each round’s dishes and declares a winner.

Hardy, who has trained with famous New York chef Marcus Samuelsson and at New York’s Gramercy Tavern, won the first two rounds. He opted to go for it in the third round, where he was challenged to “create a dinner that looked like a dessert.” Hardy created a meatball sundae, with mashed potatoes as the whipped cream.

You can find both of them on the plaza at Reston Station, above the Wiehle-Reston East Silver Line Station, at morning and evening rush hours on weekdays.

END_OF_DOCUMENT_TOKEN_TO_BE_REPLACED

More Stories
Beyond 9 Lives: A Liver Ailment of ConcernOpen Houses This Weekend in Reston