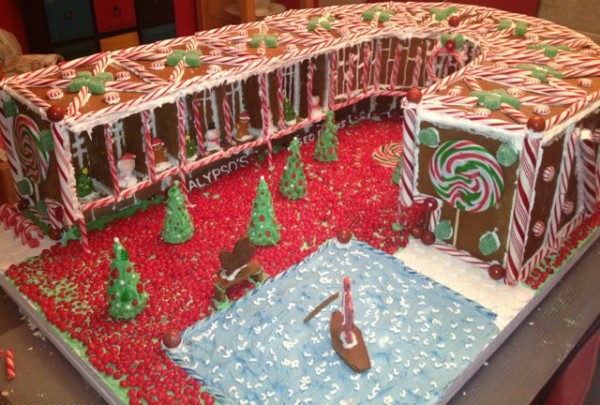 Gore, a business consultant by day, says he is carrying on a tradition of elaborate gingerbread construction begun by his mother, Elizabeth Gore, in the 1970s. Elizabeth Gore announced two years ago she was ended the tradition. That’s when Glenn took over.

I make the gingerbread using a family recipe, and royal icing holds everything together. Last year’s, as well as this year’s, houses are made of entirely edible ingredients and candy.

This year’s Lake Anne Village Center was constructed using 17  batches of dough (one batch will cover a typical cookie sheet). I build the gingerbread structure; my wife does the decorating.”

Gore even added a touch to show this is Lake Anne in 2014 — a gingerbread Santa paddleboarder.

Gore and his wife have worked with the Lake Anne Merchant’s Association, which is letting them display the project in the old Lakeside Pharmacy space through the holidays.