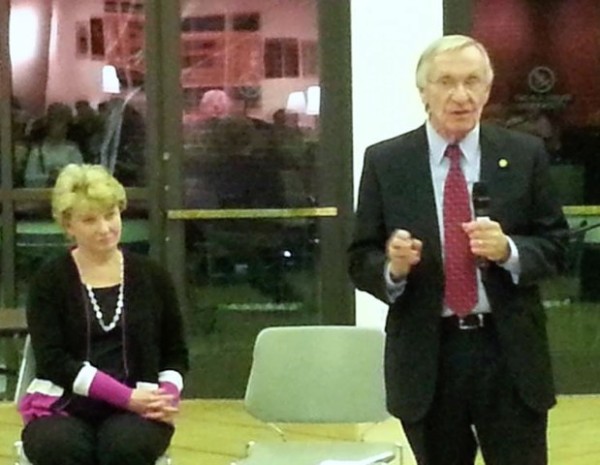 Del. Ken Plum (D-Reston) and Sen. Janet Howell (D-Reston) held their annual meeting with constituents Thursday night, where they discussed issues important to them and those that the public wants to see brought to attention in the 2015 Virginia General Assembly session that begins Wednesday in Richmond.

The event drew several dozen residents to the Reston Community Center Hunters Woods, where they listened to the legislators’ plans for the session, and were able to give feedback on several topics.

Among the topics discussed:

Gun Control — Plum advocated for “common-sense approaches” to gun safety, including the expansion of background checks to cover the “gun-show loophole,” in which gun buyers are able to bypass a background check by purchasing their firearm from an individual seller at a gun show.

“That whole arena of gun legislation is very controversial.” Plum said, “I will tell you that in the House there is a subcommittee that is made up of persons who have straight-A ratings by the NRA, and get all these bills, so it’s a hard climb to get these bills passed […] we need to bring pressure to say that we can protect people’s constitutional rights, but we can have common sense gun legislation.”

“There are hundreds of thousands of Virginians today without medical insurance because of the legislature’s inability to act.” Plum said, before urging the public to contact other legislators across the state about supporting this bill.

Gerrymandering — Plum voiced his concern about the way that legislative districts are drawn by legislators, calling it “a total conflict of interest.”

Plum has once again introduced a bill calling for a non-partisan organization to handle the redrawing of district boundaries.

Howell, the former chairman of the Privileges and Elections Committee in the Senate, has introduced a similar bill.

“I have put in, like Ken has, a bill for non-partisan redistricting,” said Howell. “It was my misfortune during last redistricting to be chairing that committee in the Senate. Like Ken said, we have a lot of lawsuits, unfortunately not challenged, with the Senate redistricting. But I will tell you that process was horrible because we had to take all these political factors, and it was almost impossible to keep communities of interest together, and yet that is something we need to do.”