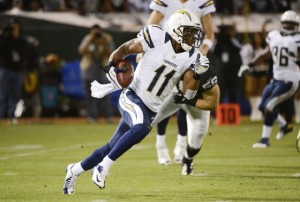 The week before Christmas, students at Reston’s Terraset and Dogwood Elementary Schools were given an early holiday present courtesy of Eddie Royal, a wide receiver for the San Diego Chargers.

Royal, in his seventh NFL season, made a donation that was used to purchase gift cards to Walmart so 50 disadvantaged kids could enjoy presents this holiday season.

Royal, 28, grew up in Reston and attended Dogwood Elementary and South Lakes High School before graduating from Westfield High School.

“Students at Terraset came down to the office area, where we had computers set up for some online shopping,” said school technology specialist AnnMarie Mochen. “Ms. Trout, the principal of Terraset, then told the students about Mr. Royal’s generosity and his desire to give back to his local community. The students were overjoyed to buy gifts for themselves and their families. ”

Royal’s mother even stopped by to help the students pick out gifts.

Said Terraset Principal Lindsay Trout: “Eddie Royal’s donation allowed 50 children to have a very special holiday this year (25 from Terraset and 25 from Dogwood). Eddie’s generosity epitomizes the spirit of the season. He has remembered fondly where his roots are and he goes out of his way to give back to the community that helped him become the fine man he is.  Terraset and Dogwood are better schools because of his selflessness; he serves as a real life role model for our students.”