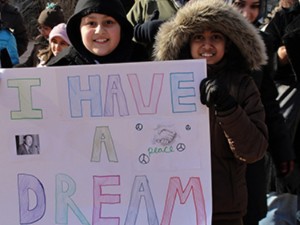 Reston Community Center is sponsoring a full weekend of cultural and volunteer opportunities as a way to honor Dr. Martin Luther King Jr. Martin Luther King Day is Monday, Jan. 19 and is considered by many to be a day of service. RCC has a number of ways residents of all ages can take part.

Here is the full lineup of events in Reston:

Maestro Dingwall Fleary will lead the Reston Community Orchestra in the ninth annual musical salute to Dr. Martin Luther King, Jr. The Concert will feature the works of African-American composers, as well as works inspired by the civil rights movement for which Dr. King gave his life. New this year is an inspiring performance of Dr. King’s “I Have A Dream” speech by students from Reston’s Al Fatih Academy. The performance is free for all ages, and donations are appreciated.

Enjoy a special evening of Kosher Gospel featuring the Prince of Kosher Gospel Joshua Nelson. Nelson fuses Jewish lyrics with the soulful sounds of American gospel music.  Sponsored by Congregation Beth Emeth of Herndon. Tickets are $25 per adults, $18 per child.

Reston children have created works with themes centered on the history of King and the civil rights movement,  art will be on display from early January through the end of the month.

Community members will assemble at Lake Anne Plaza, where Rev. David North will teach a brief history of songs used in the civil rights movement and then lead everyone marching and singing songs to Northern Virginia Hebrew Congregation. A shuttle bus will run between the two sites from 2:30 p.m. until after the Voices of Inspiration program concludes.

All ages are welcome to the free program. This is the 25th Anniversary program honoring Dr. King, which is sponsored by the Martin Luther King, Jr. Christian Church.

8 p.m. –  “Snapshots: Portrait of a World In Transition,” at CenterStage

Acclaimed actress and playwright Anna Deavere Smith performs her one woman show, “Snapshots: Portrait of a World In Transition,” at CenterStage at the Reston Community Center Hunters Woods. Smith slips in and out of character recreating a diversity of emotions and points of view on controversial issues. Tickets are $25 for Reston residents and employees, and $50 for non Reston, and are available through the CenterStage box office.

Children in first through sixth grades are invited to take part in a series of activities based on the history of King and the civil rights movement.

A Community Lunch immediately follows. Tickets are $5 for Reston residents and employees, and $10 for others.