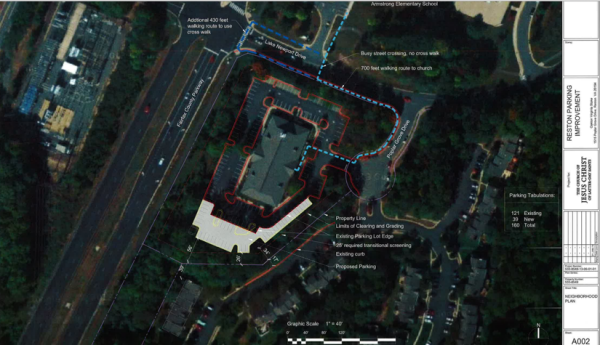 The Church of Jesus Christ of Latter -Day Saints has filed paperwork with the Fairfax County Planning Commission to get approval to add nearly 40 spots to its parking lot at 115 Poplar Grove Dr. in North Reston.

The church wants to expand the southern end on its existing parking lot from 121 to 160 spaces and replace an existing shed. The inquiry has not yet been given a date on the planning commission calendar.

The proposal is really a continuation of a quest that began two years ago.

The new plan calls for planting of replacement trees and shrubs to provide a 25-foot buffer, as well as a relocated storage shed. The church also reduced the number of additional parking spots to 39, for a total of 160 spaces in the new lot.