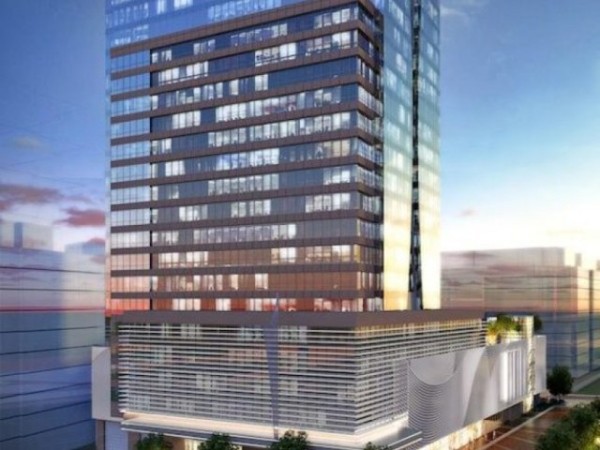 When D.C.-based developer Akridge announced on Monday that it had teamed with RTC Partnership LLC to construct what will be Reston’s tallest building, it brought a somewhat dormant project back in to the spotlight.

The Fairfax County Board of Supervisors approved the $210 million project back in Sept. 2012. The 330-foot tall tower will replace an aging five-story office tower at 1760 Reston Parkway.

“This will stand as a stark example of what world-class design is called for in the principles of Reston,” Hunter Mill Supervisor Cathy Hudgins said at the September 2012 BOS hearing. “We will not have to remain in the sameness of heights and density as a measure of world-class design.”

The journey to approval of the tower — which will hold 420,000-square-feet of office space at Reston Parkway and Bowman Towne Drive — was not without controversy.

Opponents of the project were concerned about the scale of the building, calling it “incompatible with Reston. Also of concern was additional traffic as the building, which will contain a parking garage, will be nearly one mile from the Reston Town Center Metro station, which is scheduled to open in late 2018.

Critics of the project included Reston Association and the Fairfax County Planning Commission staff, which said the building was out of scale with its surroundings.

The building was approved by the supervisors anyway. The current  building was zoned Planned Residential Community in 1978 and is under no height restrictions. The proposed density of 4.08 Floor-Area Ratio on the 2.36-acre property is actually less than several surrounding buildings or proposed buildings, representatives for RTC Partnership pointed out at the time.

The project was recently mentioned at last month’s Board of Zoning Appeals hearing on whether Reston National Golf Course could be considered residential. The building was mentioned as one that was approved by the Board of Supervisors contrary to the staff report.

The proposed height of the building makes it 125 feet taller than Reston’s tallest building, One Freedom Square.

However, with a high-density project coming at The Spectrum, which surrounds 1760 Reston Parkway, as well as the new, 14-story residential towers at The Harrison nearly ready to open across the street, the building will not be such a contrast eventually.

Reston founder Robert E. Simon, who has long been a proponent of higher density in Reston, called the project “a perfect location” back in 2012.

“The question is ‘is this is good location?'” said Simon. “It is a perfect location. Town Center starts at and goes to This building will be right in the center and will be appropriate.”

No start date has been set. The Washington Business Journal reports that the building is seeking an anchor tenant to prelease at least 150,000 square feet before proceeding with construction.