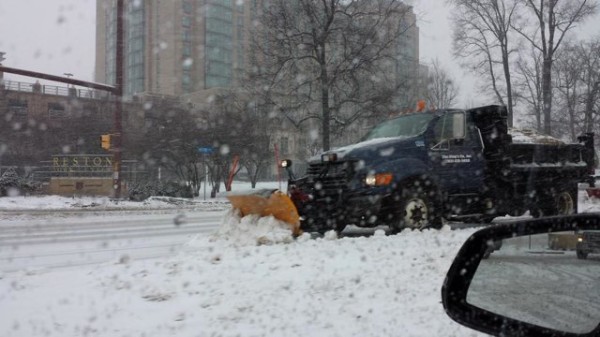 Updated, 6:35 p.m. Thursday: Fairfax County Public Schools have announced there will be no school Friday.

VDOT says there are multiple road closures throughout the county as snow began falling at 7 a.m. and was still falling at 5 p.m. The National Weather Service said Reston had received 7.5 inches of snow through 5 p.m.

Fairfax County 911 said it received calls from drivers asking about abandoning their vehicles. The county says vehicles will be towed at the owner’s expense.

If you can safely move your vehicle out of travel lanes you can call a tow truck to get the vehicle home; any vehicle left for more than 12 hours or deemed a road hazard by the police will be towed.

Abandoned vehicles may also contribute to accidents and the owner will be ticketed in this event. Exiting your vehicle puts you and other drivers in danger. If your vehicle is stuck and you are in danger, call 9-1-1, but otherwise you should have it towed.

Please remain off the roads if possible. Visibility is limited, temperatures are dropping and conditions are further deteriorating.

More than 3,800 trucks continue to plow roads in Fairfax, Loudoun, Prince William and Arlington counties according to VDOT. Staying off the roads allows crews to work safely. Crews are spreading salt and abrasives, as appropriate, concentrating their response efforts on the most heavily traveled routes. VDOT’s goal is to have all state-maintained roads passable within 48 hours after a storm ends.

This storm; however, may deliver a second punch as temperatures drop to record levels and icy conditions remain likely into Friday.

A Winter Storm Warning remains in effect until 9 p.m. Thursday.

Reston Now will update this story with any school and government closings for Friday.