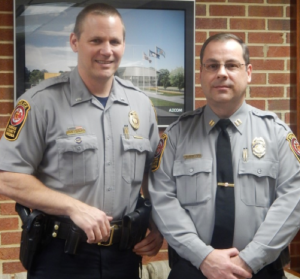 The entire department moved into its new $18 million building last month. The new police station and North County Government Center is at 1801 Cameron Glen Dr., directly next door to the old building. The old building will be torn down soon and will become parking for the new headquarters.

Manzo comes to Reston most recently as FCPD’s Commander of the Planning Research Bureau.

Prior to that, he was Assistant Commander of the West Springfield District Station. He is joined by  Lt. Lance Schaible, who will be second in command.

During his time at West Springfield, Manzo was on the scene of the shooting of John Geer, a 46-year-old man who was shot by an FCPD officer after a domestic dispute and then a standoff at his home in summer 2013.

Capt. Manzo did not shoot Geer, but according to Geer’s family and attorney Michael Lieberman, who have filed a wrongful death lawsuit, the FCPD was negligent and failed to supervise the patrol officer who fired.

The lawsuit also questions police’s failure to summon a trained negotiator to deal with Geer. Family members also say Geer’s body was left in the home unattended by police for many hours.

Adam Torres, the officer who fired the shot from 17 feet away, has said in testimony he thought he saw Geer reach for a weapon. The other four other police officials, including Manzo, watching from a distance said they saw no such thing, The Washington Post reported.

The other officers at the scene agreed Geer had his hands above his shoulders, did not move them to his waist and was unarmed when he was shot, according to county documents in the case.

Fairfax County did not release information on the investigation until a judge ordered them to do so in December. The county then released 11,000 pages of information.

Meanwhile, Fairfax County Supervisor Chair Sharon Bulova has created a 34-member ad hoc police commission to review police procedures. The commission will meet for the first time March 23 and is expected to issue a report in the fall.

“I have urged that the Board discuss this matter in open session to review the current policy, to set benchmarks on what we wish to accomplish and to create a process of citizen engagement,” Hudgins said in an email to residents of her district last week.

“True transparency uses the established BOS process and committee structure. The original Ad Hoc Police Practices Review Commission Board Matter, presented by the Chairman, should have gone to the Board of Supervisors Public Safety Committee for discussion. This level of engagement would help shape the issue in a more comprehensive way and allow the community to at least hear and respond to our discussion.”

Hudgins says the county needs to take into account citizens’ expressing a lack of confidence in matters of police accountability on lethal force.

“Starting a process that does not bring the citizens in at the beginning is not a good response to citizen
concern.”I endorse structured citizen involvement to hear and respond to Board proposals. Community input is a valuable resource and an excellent mirror to reflex transparency,” said Hudgins. “It is to that transparency that I am fully committed. It is my hope that the proposed process has meaningful citizen involvement and yields a proposal for real transparency in the review of Fairfax County Police use of lethal force.”