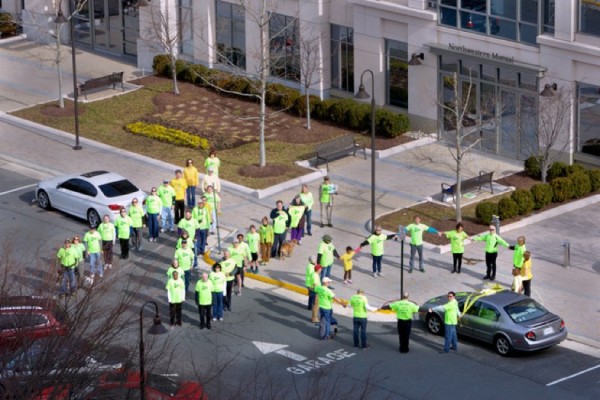 The Fairfax County Board of Zoning Appeals will make its decision on the possible future of Reston National Golf Course on April 15, so open space advocacy group Rescue Reston is organizing for the decision — and whatever may come next.

About 50 group members met in front of Reston’s Northwestern Mutual Insurance offices on Sunrise Valley Drive on Sunday to spell out the word “no.” Northwestern Mutual is the parent company of Reston National Golf Management, which is appealing a 2012 county zoning decision that the course is open/recreational space and altering the planned use of the 166-acre golf course at Sunrise Valley and Colts Neck Roads would require a comprehensive plan amendment.

The BZA heard about seven hours of appeal testimony at a hearing on Jan. 21. The hearing included lots of details about zoning filings and Planned Residential Community (PRC) documents, including many details on how and when the original 1971 zoning documents were located since 2012.

RNGC attorney Frank McDermott maintained at the hearing the recently located documents are not official county records with official government stamps, so they are not valid.

Rescue Reston President Connie Hartke said at Sunday’s rally that if the BZA rules in favor of the Fairfax County Zoning Administrator, it will be “three strikes and [Northwestern mutual] should accept the word ‘NO,’ meaning no to residential development of the 166-acre recreational space across the street from where they stood. ”

“It’s time they got the message,” said Hartke.

Rescue Reston leaders said in an email to group members last week that the losing side “has 30 days after the decision to petition for appeal to the Circuit Court.” That could tie the case up in for many more months, even more than a year.

“Rescue Reston needs to continue to be involved in the legal process to provide the voice of all who support the open space that makes Reston unique,” said Rescue Reston. “We have until April 1 to submit more documentation for the BZA to consider. [Attorney] Randy Greehan will be present on April 15 to represent us. Whichever side wins, we fully expect the process to continue through appeals.”