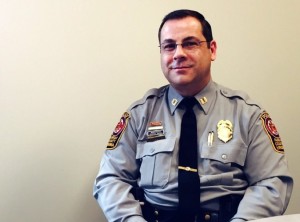 Manzo, a 47-year-old Fairfax County native, has been with FCPD for 22 years, rising through the ranks at various stations around the county. He spent 13 years at the Franconia District station, where he was everything from a crime prevention officer to detective.

His two most recent postings since rising to the rank of captain were as the Assistant Commander at West Springfield and commander of the Planning Research Bureau, which works directly with the Chief of Police.

Reston Now spent a few minutes with Capt. Manzo this week at his office in the new $18 million Reston District Station on Cameron Glen Drive. He says one of his goals is to “get back to basics” in policing here — have a greater visibility and more effective outreach with citizens.

Reston Now: You have been posted all over the county in your career, but never before in Reston. What strikes you as unique about Reston compared to other stations?

Capt. Manzo: I have only been here three weeks, so I am still getting a feel for Reston. The community has been very supportive. Supervisor Hudgins has done great things here.

Reston is growing. Other parts of the county don’t seem to be growing as fast. The Metro, the bike paths. These are different challenges I face as a commander on how we provide services here.

Reston Now: A common thing some people say is “Metro brings crime.” Metro has been here for eight months and according to FCPD stats, crime has not gone up. So is that statement a myth?

Capt. Manzo: I have only been here three weeks, so I have not looked at all the numbers. But in talking to the officers, we have not seen an increase. I think more people getting on Metro here and riding to where they need to go than people heading here.

Crime is down across the county. I think Metro is a good thing, a great thing.

Reston Now: You were talking about getting back to basics and getting officers out on bikes. What else are you instituting here?

Capt. Manzo: In coming here one of the first things I did is run the stats on officers in the station to see where we were as a station. I want to focus on improving our service. I dusted off our strategic plan, which each station has, looked at areas we can improve.

We can improve in community outreach. We support the mission of preventing and fighting crime, too, of course, but I want to get us back to the basics. Getting patrol officers to “own” patrol area. Creating a police service area manager so I can monitor some of the citizen complaints in Reston that don’t necessarily rise to criminal level. I can assign that to a PSA officer, and they can put it out and then get back to me with what actions were taken.

Bike team is part of getting back to basics, of being active and visible to the community. There are nearly 60 miles of bike trails here. At Franconia, I did every thing you can do at the station. I was a crime prevention officer, bike officer, detective. I understand the importance of being out there. I understand the missions and I can tweak our strategic plan to support them.

It is important to me officers don’t sit behind the steel doors of the cars. They need to be out and engaging in the community.  I want them out educating the public.

Also, there are a lot of pedestrians here, and people crossing against crosswalks and jaywalking. That’s going to be a focus as well.

It’s an exciting time for Reston

Reston Now: There are two areas of Reston — Lake Anne Plaza and Hunters Woods Village Center — that have the perception of “high crime.” They probably are higher crime than most areas of Reston, but some of it is nuisance crime. There has been police outreach in the last year to improve perception, particularly among elderly people who live in the Fellowship Houses there. Are those high priority areas for you?

Capt. Manzo: They are. I am familiar with Hunters Woods. We had an initiative last year. That was one of the areas where crime had increased. As a result of our initiative, it has dropped down. So those areas will be a focus as well.

We are not going to spend 100 percent of the time on two areas, though. We are focused on Reston as a whole. No one in Fairfax County, particularly in Reston, should feel unsafe walking at night. That is why I want to get my officers out there in force and that is why I am bringing in other support resources.

I have an zero tolerance policy. I will not tolerate people coming into Reston and committing crime. If they do, they will be locked up. Other thing, is everyone will be treated (by police0 professionally and fairly. If the officer does not, I will hold him personally responsible.