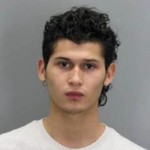 Fairfax County Police have made an arrest in the stabbing death of a man who was found last month in a wooded area off Hiddenbrook Drive in unincorporated Herndon.

Moises Dominguez, 18, has been charged with second degree murder in the death of William Adolfo Rivas Leiva, police said.

Dominguez, of Sterling was arrested on Wednesday. Detectives said they are looking into the possibility that the homicide was gang-related.

Rivas Leiva, 22, was found in the woods at Folly Lick Stream on March 15. He had upper body trauma and police investigated the death as a homicide.