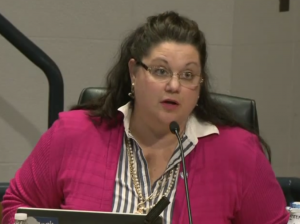 The Fairfax County Public Schools Board voted on Thursday to add gender identity to its non-discrimination policy.

The 10-1 (with one abstention) vote came in a packed hearing room at Luther Jackson Middle School, where testimony was interrupted by applause, boos, and other noise from an impassioned capacity crowd.

The motion to add protections for transgender students, teachers and employees was introduced by At-Large board member Ryan McElveen. McElveen says it is important for the largest school system in Virginia to make a statement “that we unequivocally protect, value and embrace all of our students and employees for who they are.”

National statistics show about half of transgender teens have attempted suicide once before they turn 20. McElveen said that number was crucial in his reasons for introducing the transgender protection.

The new policy states that “no student, employee, or applicant for employment in the Fairfax County Public Schools shall, on the basis of age, race, color, sex, sexual orientation, gender identity, religion, national origin, marital status, or disability, be excluded from participation in, be denied the benefits of, or be subjected to discrimination under any education program or activity, as required by law.”

At Thursday’s meeting, Springfield board rep Elizabeth Schultz, the lone dissenter on the board, made a motion to give the proposal some more time before voting.

“[That] a class of individuals may hurt another in a bathroom is not the issue,” she said, pointing out the concern that the protections has been oversimplified by some in the community as an issue about coed bathrooms.

“How those rights are protected has not been addressed by this board. … We have no information about the potential cost [of implementation]. It is fiduciary malfeasance to undertake anything without understanding the germane costs of such action.”

Providence member Patty Reed, who abstained from the vote, said the quick process to move the motion through “has been troubling and embarrassing.”

Prior to the vote, the board heard testimony from 10 citizens on the subject — the maximum allowed at a FCPS meeting that is not officially a public hearing.

The speeches ranged from fears of sex crimes against children to support for the board providing the same rights for students and employees as federal and state laws.

Freddy Burgos, who has three daughters in FCPS, said the motion undermined First Amendment rights “by institutionalizing that boys and men can dress like girls in school.”

He also said the distraction of transgender students will lower performance, and that will harm minorities.

Said another speaker, an FCPS parent: “This opens the door to 3,000 sex offenders that would not be stopped immediately when seeking access to female-restricted areas. … The policy is ill-designed and not respective of parents. There is no evidence it will work and it will increase sex crimes against children as young as 5 years old.”

Rev. Emma Chattin of the Metropolitan Community Church of Northern Virginia, a LGBT-inclusive congregation, said she applauded the board for taking the step towards inclusion for all.

“All I have heard [in citizen testimony] is fear,” she said. “One thing I can assure you of is this nation never moved forward in fear. It is not a matter of affirming something you don’t believe in. These kids are already here.”

Gordon Baer, a 2013 West Potomac High graduate and a member of Gay, Lesbian & Straight Education Network (GLSEN) of Northern Virginia, said he and others in FCPS schools “graduated in spite of our mental capacity going towards battling prejudices in the school itself.”

“The fact is, a hostile climate detracts,” he said. “This is not about bathrooms as it is about classrooms and the ability to learn under those conditions.”