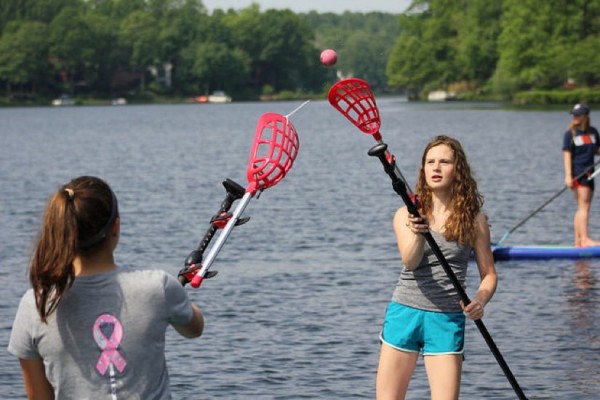 First, there was standup paddleboarding on Reston’s lakes. Then came yoga on said paddleboards. Now, Steve Gurney, the owner of Surf Reston Stand Up Paddleboarding, has come up with a new way for fun on the lake.

Two summers ago, Gurney attached a lacrosse stick to a paddle and got the idea for Paddle Polo. Players can use the paddle to pass the ball back and forth as the cruise around on water — or engage in a fast-paced polo, lacrosse, even golf or baseball games.

About a dozen design changes later, Gurney has a provisional patent, a Reston-based (albeit small) manufacturing operation and an e-commerce site.

“I was lifeguarding via SUP at the lake swim [on Lake Audubon], and I had a couple of lifeguards talking about lacrosse,” said Gurney. 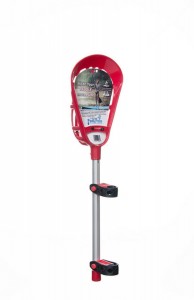 Gurney shared his idea with his father, Jack, a retired engineer. Jack Gurney tweaked the design and used the 3D printer at Langston Hughes Middle School, where he is a volunteer, to make the second prototype, said Gurney.

The Gurneys then moved the design test to Reston’s Nova Labs, a makerspace, where the design went through further changes.

“My dad and I presented at the Nova Mini Maker Faire this spring to show people how you can execute on an idea using community resources,” said Gurney. “Our current model is manufactured from several sources but assembled in my garage. Things are heating up with the sales we are doing really well with youth camps and lacrosse camps leagues and tournaments.”

The paddles retail for $32.95 on Paddlepolo.com. The site also sells Paddle Polo floating balls and offers volume discounts (in case you want to outfit a team).

Interested in trying before buying? You can test out Paddle Polo at a Surf Reston session on Lake Anne or Lake Audubon.