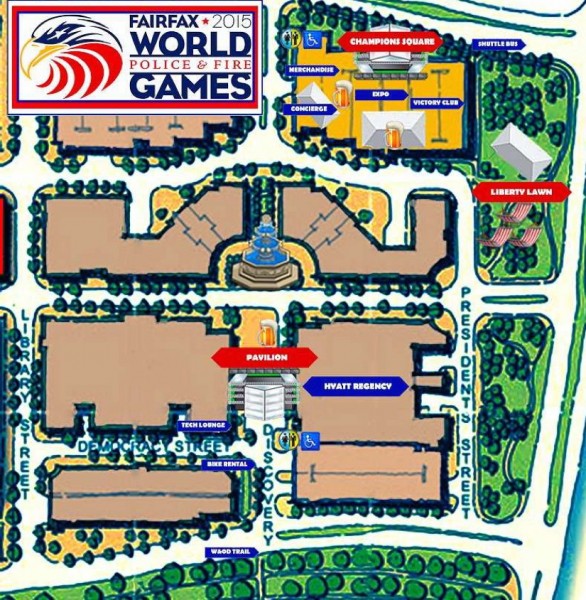 Reston Town Center will be the central location for World Police & Fire Games athletes when they arrive by the thousands later this month.

More than 10,000 police and fire rescue personnel from all over the world will compete in the games, which run from June 26 to July 5 at numerous locations in Fairfax County.

Reston Town Center is the site of the Athletes Village. Athletes will not be housed there, rather, it will be the spot for mingling, evening entertainment, dancing, and other nightlife.

Here is what will be at RTC:

The surface parking lot at Presidents Street and New Dominion Parkway will be Champions Square, for the public, athletes, friends and family. Champions Square will feature a Champions Pub, live bands, vendors, souvenir sales, entertainment and a concierge service.

The Liberty Lawn will be set up on the grassy area between Presidents Street and the Hyatt Regency Reston. This area is also for the public, athletes, family and friends and will feature hammocks for relaxation, lawn games and a “lawncierge tent” to rent soccer gear, volleyball, badminton, croquet, bocce balls and other sporting equipment.

The town center pavilion will be open for credentialed athletes and their guests. There will be a silent disco (dancing while listening to multiple DJs on headphones), a tech lounge, games and bicycles for rent.

Hours will vary at all locations. See the full schedule on the World Police & Fire Games website.