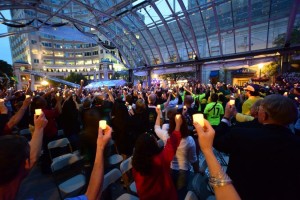 Public safety officers from around the region will escort the the body of Brazilian police investigator Carlos Silva from Alexandria to Dulles International Airport Wednesday morning.

A memorial service was held for Silva at Reston Town Center Friday night, and visitors left mounds of flowers at a memorial to Silva near the Mercury Fountain.

The caravan will impact some Reston-area roads.

The escort will depart from Metropolitan Funeral Service at 5517 Vine Street in Alexandria on Wednesday at approximately 10 a.m.

The escort will travel on South Van Dorn Street to I-95 South, to the I-495 HOT Lanes North, to Rt. 267 (Dulles Toll Road), then the Dulles Access Road West, to the airport.

“We ask the motoring public for their patience and understanding as the escort may cause brief traffic disruptions along the way,” FCPD said in a release.

Police said the community is welcome to join public safety personnel along the escort route in order to express their support for Silva and the other injured athletes, who are recovering at Inova Fairfax Hospital.

The World Police & Fire Games, which concluded its 10-day run in Fairfax County Sunday, has set up a Go Fund Me Page to help Silva’s family, as well as the families of the two injured cyclists.