While I am far from a world traveler, I find the trips I take to other countries to be relaxing, fun and educational. I agree with those who stress the value of traveling abroad to a complete education. An increasing number of colleges and universities have made study in other countries available and sometimes required of their students.

I seem to be happiest when I am learning, and a couple of weeks immersed in another land and culture brings new discoveries, challenges to my own paradigms, and the excitement of seeing and doing.

The recent vacation Jane and I took to the Netherlands, Belgium, and the Mosel Valley in Germany was no exception. While it can be questionable to draw too many conclusions after being in a place for only hours or days, curiosity can be aroused that can be verified with some research when you get home.

I always pay close attention to how other countries deal with their transportation needs. Never have I seen as many bicycles as there are in Amsterdam. Multiple levels of covered parking for bicycles at the airport and train station accommodate thousands of bicycles. Most every lamp post, park bench, and railing had bicycles chained to it. 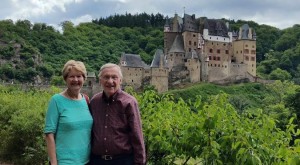 Checking on my observations when I returned home I found that Amsterdam and other Dutch cities are the most bicycle-friendly in the world. There are more than 22,000 miles of bicycle lanes in the Netherlands with more than a quarter of all trips made by bicycle. That number is 38 percent in Amsterdam, a city of about a million people, and in the university city of Groningen 59 percent of all trips are by bicycle.

A typical street scape in Amsterdam would include a narrow lane for automobiles, bicycle lanes in both directions, trolley rails, and a sidewalk for pedestrians. Men and women dressed for work were among those on bicycles as were many seniors. Spending a couple of days there makes it obvious why it is considered one of the best cities in the world in which to live.

Brussels is likewise a beautiful city to visit, but I think it is especially noteworthy as the center for the cooperative efforts that are going on in Europe with the European Union and the European Parliament. At a time when there is so much strife among countries, it is reassuring to see the progress being made in mutual support and cooperation in Europe even if it is slow given the strong sense of nationalism and history that exists among the countries.

Of course I pay attention to things that relate to issues I deal with as a delegate, but do not let me mislead you about our vacations. I also give equal or more time to enjoying the flowers and foliage of the region, the local foods, and the people we meet. That’s what is great about traveling abroad: you learn a lot while you are relaxing and having a good time.

Ken Plum represents Reston in Virginia’s House of Delegates. His opinion does not represent Reston Now.