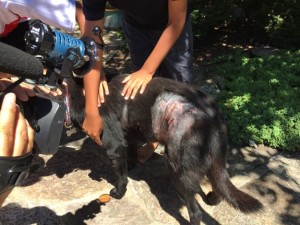 Fairfax County Animal Control officials are urging area residents to take extra care if leaving their pets out unattended after a dog was attacked by wildlife — possibly a bear — in the Great Falls area this week.

A veterinarian who was treating the dog for its wounds called Fairfax County personnel on Tuesday to report that the dog sustained injury while he was in the the 100 block of River Park Lane near the Potomac River as a result of an encounter with wildlife at some point on Sunday evening, Fairfax County Animal Control said.

“Without a witness, it is hard to say exactly what happened to cause the dog’s injury, but in an abundance of caution, animal control and wildlife management personnel remind residents to keep their pets contained to their property and monitor their time outdoors,” Katherine Edwards, Certified Wildlife Biologist for Fairfax County, said in a statement.

Trail cameras are being set up Thursday in wooded areas near the River Park Lane incident. Footage will be monitored for any unusual wildlife activity taking place in the area, officials said.

“Fairfax County does not have record of any similar incidents but there are cases where injuries resulted from dogs attacking other dogs and those were erroneously attributed to wildlife,” Edwards said.

Black bears are not typically aggressive and will retreat when encountered, animal control says. There have been a handful of local sightings in the Great Falls/McLean area this spring and summer.

Overall, the Virginia Department of Game and Inland Fisheries has received 12 bear sighting reports this spring. The most recent was Wednesday in the Chantilly area.

Most bears are attracted to property because of an available food source.

Tips to minimize interactions with bears and other wildlife include: