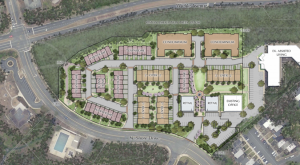 The Reston Association Board of Directors passed two motions on Wednesday relating to its role in future development at Tall Oaks Village Center and Reston Town Center North.

JAG, which purchased the ailing village center last year for $14 million, plans to redevelop it into a neighborhood of more than 140 residences, including two garden-style condo buildings, 2-over-2 townhouses and 100 traditional townhomes.

The developer said it listened to public input after the community meetings in April, when residents said there was not enough public or retail space. At a June meeting, JAG showed concept plans for double the initial retail space, a decrease in the original number of townhouses, and expanded park areas.

The Urban Land Institute has documented the importance of public-outdoor plazas and meeting areas as follows:

“A successful public realm is one in which commerce, social interaction, and leisure time activities may mix easily in an attractive, pedestrian-friendly, outdoor setting. People are drawn by the simple enjoyment of being there. If that enjoyment is to be felt, the public realm and public spaces must be well designed and programmed.

The public realm is open to programs that are significant to the community such as charity events, holiday events, and civic events. It becomes a true public place, taking on a life of its own. As part of the community that goes beyond simple commerce or public relations, it ultimately becomes a place with a history. The public realm should allow for the integration of the people, the place, and the larger community.”

The board also approved a motion to allow RA counsel inform Fairfax County/INOVA that a parcel of land located in the area known as Reston Town Center North is RA-covenanted property.

RA says its wants to make clear any future development there is subject to RA Design Review Board standards and that new residents will be members of the association.

Fairfax County and Inova recently completed a land swap to organize the 49-acre space from New Dominion Parkway to Baron Cameron Avenue. The county also recently issued a Request for Proposals for the first two blocks of Town Center North.

Town Center North will be a mixed-use district, with renovated or relocated space for the Reston Regional Library and Embry Rucker Community Shelter, as well as offices, hotels, a performing arts center, an indoor recreation center, a town green and at least 1,000 new residences.

Graves noted that deeds for the space recorded in 1974 and 1986 “subjected all but 16,500 sq. ft. (parcel 5A) of the land that is included within the Fairfax County/INOVA Reston Town Center North Redevelopment Project (RFP #20000001682) to the Reston Deed declaration of covenants.”

Graves also said the board has been made aware of a recorded Restrictive Covenant on a 10-acre portion of the land that is within the Town Center North Redevelopment Project RFP.

Graves moved that RA counsel be directed to assist Fairfax County and INOVA in
working around this restrictive covenant but only in a manner which preserves and/or enhances natural open space within Reston.