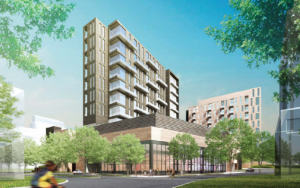 A year after being approved by the Fairfax County Board of Supervisors, the plan for a mixed-use development on Reston Town Center’s last undeveloped parcel is going back for revisions.

Boston Properties’ plan for Blocks 4, currently RTC’s 251-space surface parking lot, will go before the county planning commission on Sept. 30 and the Board of Supervisors on Oct. 6 for public hearings on small changes to the project.

Rich Ellis, Boston Properties’ Vice President of Development, says the application involves a minor design modification to one of the two residential towers planned for Block 4. The design change will not alter the total unit count or retail square footage, he said.

In summer 2014, the Supervisors approved Boston Properties’ plans, which include include two high-rise residential buildings with up to 549 units and nine levels of underground parking, for the surface lot at Fountain Drive and New Dominion Parkway.

Boston Properties purchased the six-acre site in 2013 and then changed the zoning from office space to residential.

Boston Properties will move the office part of the development to Block 5, where the current FedEx/Kinkos and Ann Taylor are now located, with additional office space above.

The plan calls for turning that three-story retail/office building into a 17-story building with 276,788 square feet of office space and 7,800 square feet of ground-floor retail. The building would also have four levels of underground parking.

At the base of the 21-story tower will be two-level townhouse units, stacked three high. Each ground-level unit will have a terrace along New Dominion Parkway. Five levels of residences will also wrap around the parking structure. The complex will have its own pool. 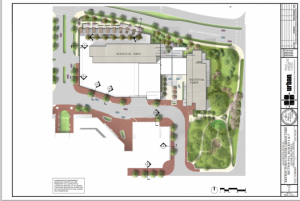 Along President’s Street, the developers plan open space with outdoor dining areas and a pedestrian connection from the buildings to a proposed park along Reston Parkway. The park will feature a yoga deck, lawn and public art space.

As one of the proffered conditions for construction, which is expected to begin late this year or early in 2016, the developers will have to meet Fairfax County requirements for tree preservation.

Boston Properties will also have to build road improvements such as left turn lanes from Reston Parkway, New Dominion Parkway and Fountain Drive. Sixteen percent of the housing units will be set aside as workforce housing.

The board also in 2014 approved a reduction in parking of 22 percent (up to 192 fewer spaces) because of its proximity to future mass transit. The planned Reston Parkway Silver Line Metro Station is a half-mile away.

The Spectrum, a low-rise strip mall located just across New Dominion Parkway, has been approved for redevelopment into 774,879 square feet of non-residential use and 1,422 multifamily residential units in seven new residential buildings. The new area will feature a hotel, and Harris Teeter is the only retailer expected to remain under the current plan.

Additionally, part of the Spectrum will wrap around the planned 23-story office tower at 1760 Reston Parkway. That building, which will contain retail and 18 stories of offices, was approved by the supervisors in 2012.