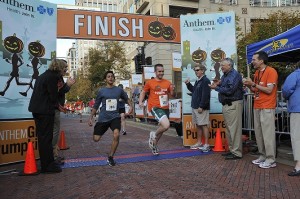 Halloween costume-clad runners will return to Reston this fall.

After the 2014 Oktoberfest took place without its popular Great Pumpkin 5K, a race is back in the lineup for 2015.

The Anthem Great Pumpkin 5K, which featured one of the best logos around, was off the schedule in 2014 because the race was administered by the Greater Washington Sports Alliance, which had disbanded, Chamber president and CEO Mark Ingrao said last year. He also said the Chamber planned to reorganize the race and present it themselves for 2015, which they have.

Here is what you need to know about the new Reston Pumpkin 5K:

Kids’ Pumpkin Dash (recommended for kids ages 8 and under, all finishers will receive a finishers keepsake)
$10 per person until Oct. 9
$15 per person – Oct. 10 and 11

There will be a Scrambled Legs Breakfast! with food vendors and beer on tap when you cross the finish line.

END_OF_DOCUMENT_TOKEN_TO_BE_REPLACED

More Stories
Op-Ed: Fairfax County and Reston’s Future Urban GrowthThank You to Our Sponsors and Advertisers