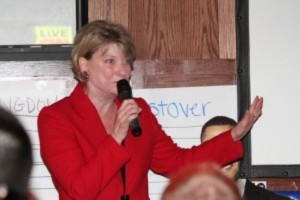 This is an op-ed from Sen. Janet Howell on the death of Reston founder Robert E. Simon. It does not reflect the opinion of Reston Now.

[On Monday], we all lost a great visionary, Reston lost its founder, and I lost a dear friend. Robert E. Simon died peacefully at his home in Reston at age 101.

Bob changed the way we view community in America when he created the Reston community over 50 years ago. Risking his fortune, he purchased land in then rural countryside of Virginia. He then proceeded to develop a community unlike any other in our country.

Reston was to be open and welcoming to all, regardless of race or economic status. In an era of Jim Crow and still segregated schools, that was unheard of. His community was to be “planned” and mix housing, businesses, and vast acres of untouched land around village centers where people could mingle and support small local shops. Respect for nature was central to his plan.

It was to be anti-suburbia, suburbia.

Not surprisingly, Reston and Robert E. Simon were way ahead of their time. The venture hit bad economic times and he was forced out. For almost two decades he left his community. But we continued to grow.

I met Bob at Reston’s 20th Anniversary. I was president of the Reston Community Association and we threw a big celebration with a parade, festival on Lake Anne and cultural events. Bob and I really hit it off and he was so happy to be back for a short while. I clearly remember riding in a convertible with him in the parade and dancing the Charleston with him on Lake Anne.

Soon after he asked me if I thought it would be alright for him to move back to Reston. He wasn’t sure it would be appropriate! I told him we needed him and we as a community were beginning to drift, losing sight of his goals.

Soon he was back here helping us all define what Reston needed. Bob was full of ideas. His biggest concern was providing for children and having Reston guide them to bright futures. He became deeply involved in planning Town Center, preserving Lake Anne, and guiding Reston Association.

He was constantly involved, constantly pursuing his goals, and constantly nagging us in a kind but persistent way to do better.

And, when he came back, he met Cheryl whom he loved and married over ten years ago. Cheryl Terio-Simon made it possible for him to continue to pursue his dreams.

I am so glad he lived to see Reston’s 50th Birthday. He was so proud. He also delighted in the children who would come to meet him. He never turned down a child’s request.

For the past two decades I have been part of a small social club that meets monthly for dinner and serious discussions. Bob was part of that group. He rarely missed a meeting and asked thought provoking questions.

On my deck in mid-August, he was himself — totally engaged and thinking of the future, especially the future of Reston. The only hint that he was not totally well was that he had only one martini, not his customary two.

Robert E. Simon taught us how to live, to achieve, and to dream.