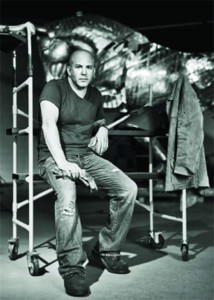 One of the major gifts President Obama presented to Pope Francis during his visit to Washington this week was a stainless steel sculpture of a dove that incorporated an iron bar from the Statue of Liberty’s original structure.

The sculpture was created by Zachary Oxman, a Reston native who also created the “Bronze Bob” statue at Lake Anne Plaza.

Oxman, 47, told The Washington Post he received a call from the State Department’s office of protocol in August asking if he would be interested in creating a gift for the Pope when he made his first visit to the United States.

The State Department had the idea of using a three-foot long iron bar that was removed from the Statue of Liberty during its centennial restoration, Oxman told the Post. The bar was originally part of the statue’s supporting structure, which was designed by Gustav Eiffel, he of Parisian tower fame.

“It’s just the thought of the hands that created this bar,” Oxman told the Post. “Frédéric Auguste] Bartholdi did the Statue of Liberty and Gustav Eiffel [designed the armature]. They were involved with it personally. And here is a sculptor given the opportunity to, not change it or melt it down, but to add to it, to give it this other life.”

He positioned the bar vertically, which reminded Oxman of the path a bird might take when taking flight. He told the Post he adorned the bar with a stylized dove, a motif that has figured in some of his works and represents peace.

This is not the first time Oxman, a graduate of South Lakes High School and Carnegie Mellon University, has called upon by Washington officials. In 2013, he created Sabbath wine goblets that Obama presented to Israeli Prime Minister Benjamin Netanyahu. Before that, Oxman, who is Jewish, created menorahs that President Bill Clinton and his family gave as gifts.

He has also created sculptures given by the White House and State Department to leaders of Mexico, China, India and Germany.

Oxman’s mother, Laney, was also an accomplished artist who taught lessons in her home studio near Lake Anne for years. Zachary Oxman lives and works in Bethesda, Md., now. He is nationally recognized for his large-scale works, which have been been commissioned by synagogues and museums nationwide.

Bronze Bob, meanwhile, is the life-sized model of Reston’s founder, who died this week at age 101. A gift from the Reston Historic Trust, it was installed on 2004 to mark Simon’s 90th birthday.

More Stories
Howell: ‘We All Lost a Great Visionary’ With Simon’s DeathOpen Houses This Weekend in Reston