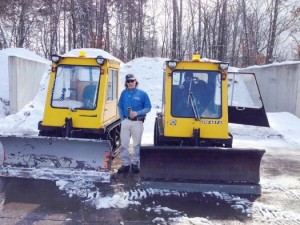 Reston Association is considering entering into a multi-year agreement with Fairfax County that will authorize RA to remove snow from county-owned trails in Reston.

Snow removal on the 1.5 miles of county trails will cost Reston Association $15,000 a year, RA CEO Cate Fulkerson says in a Board of Directors item that will be discussed at Thursday’s board meeting. RA would receive no money from the county for plowing the county’s trails.

RA is already responsible for plowing its own 55 miles of paths. The Virginia Department of Transportation (VDOT) is responsible for snowplowing major roads, but does not shovel sidewalks on those roads.

RA and the county have been talking about teaming up on snow removal since early 2014. In February of 2014, the RA board authorized staff and legal counsel to move forward in their discussions with Fairfax County to develop and enter into an agreement for RA to plow certain portions of trails.

Without such an agreement, RA could not plow or shovel those trails without significant legal liability, RA’s legal counsel has previously said.

RA officials said at that time that plowing county-owned trails would help pedestrian connectivity in Reston, particularly near the Wiehle-Reston East Metro station. The proposal does not cover sidewalks.

Under the proposed agreement, RA would be responsible for routine maintenance will include general debris removal, minor asphalt patching, pruning/edge mowing, leaf removal as necessary, and snow plowing. The county will be responsible for major repairs and capital replacement.

The county-owned trails would include:

The agreement says Reston will only care for the county trails if there are available funds within its current maintenance budget and the availability of adequate funds to apply to such routine maintenance shall be determined at Reston’s sole discretion. In the event such funds are not currently available, Reston must tell the county.

The agreement says the the trails will be plowed upon the accumulation of two inches of snow and plowed clear after the snow storm has ended; trail shoulders should be mowed monthly in growing season; and potholes should be reported to the county. RA will not be responsible for making major repairs to county trails.