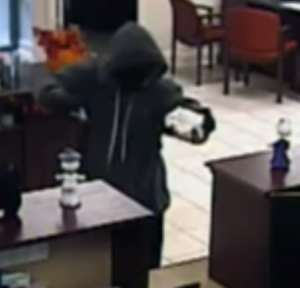 Fairfax County Police detectives are investigating an armed robbery that took place at the United Bank, 11820 Spectrum Center, on Saturday about 10:30 a.m.

Police said a man entered the bank, produced a handgun and demanded money from several tellers. An undisclosed amount of money was handed over to the suspect and he fled on foot. There were no injuries reported.

This was the second bank robbery in Reston in the last few weeks. On Oct. 10, also a Saturday about 10 a.m., a man robbed the Sona Bank at 11527 Sunrise Valley Dr.

The suspect was described as black, approximately 5-feet-5-inches tall, thin to medium build, thin eyebrows and a “lazy eye.” He had something covering his mouth and part of his head. He was wearing a green or gray hooded jacket, a dark shirt underneath and dark pants.

Anyone with information about this is asked to contact Crime Solvers electronically by visiting www.fairfaxcrimesolvers.org or text-a-tip by texting “TIP187” plus your message to CRIMES(274637)** or by calling 1-866-411-TIPS(8477), or call Fairfax County Police at703-691-2131.