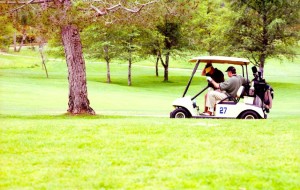 It may not be so easy to redevelop Reston National Golf Course into anything other than a golf course in the future.

A Fairfax County Circuit Court judge on Friday granted the motion for summary judgment filed by lawyers for Rescue Reston, Reston Association and other parties concerned about Reston’s open space. It also vacated the Board of Zoning Appeals decision from earlier in 2015.

This means that golf course owners RN Golf Management would have to file a formal plan with Fairfax County in order to pursue redevelopment of the course.

The motion was filed last spring after the Fairfax County Board of Zoning Appeals ruled, after a complicated and lengthy BZA hearing, that RN Golf would not need a comprehensive plan amendment to plan residential development on the 166-acre recreational space.

Judge Michael Devine said RN Golf had based its case on a letter from the county zoning administrator, which the court in effect found was merely an advisory opinion and was not appealable.

In light of its ruling, the court also dismissed other motions of the various parties as moot.

“We are pleased with the court’s ruling, which requires that RN Golf must go through a formal plan process before it can redevelop the golf course,” said Connie Hartke, president of Rescue Reston. “However, while we have won this round, the fight is not over and RN Golf still has other options available to it including appealing today’s ruling or attempting to amend the Fairfax County Comprehensive Plan.”

“We must remain prepared to continue the fight so long as RN Golf remains committed to its attempts to destroy our community’s valuable open space.”

RN Golf, a subsidiary of Northwestern Mutual Insurance, has never shown plans or discussed what it intends to build at the public course, which serves as green and serene backdrop for hundreds of homeowners.

The issue dates back to 2012, when RN Golf asked Fairfax County if the course at Sunrise Valley and Colts Neck Road could be considered residential. Fairfax County Planning and Zoning said no, it’s open and recreational space. After several postponements, RN Golf filed an appeal to the Board of Zoning Appeals (BZA).

In January, the Board of Zoning Appeals heard arguments from both sides. The BZA ruled in April that the owners could redevelop without getting a comprehensive amendment, which could ease the path to redevelopment of the land.