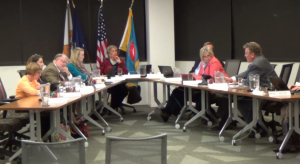 After repeated requests by a Reston Association member asking to see records of which households voted in RA elections, the RA Board is considering making all voting records confidential.

The Board will consider the action at its Dec. 17 meeting.

The motion comes after Reston resident Irwin Flashman has spent more than a year asking RA for voting records concerning board elections and last spring’s member referendum to purchase the Tetra building.

Flashman first requested voter info in September of 2014. In October 2014 RA released information on whether or not each of its 25,700 member households voted in the 2014 Board of Directors election. It also released members’ addresses, but omitted the substance of members’ votes and any other personal information.

RA said then it was obligated to release the information under its bylaws and Virginia law.

Flashman said at the time he wanted the records so he could analyze and try to boost the number of locals who cast their ballots.

Fewer than 15 percent of households typically vote in the RA Board elections each spring, RA records show.

In Nov. 2014, the board denied a request by Flashman for an electronic copy of those voting records.

This year, Flashman has repeatedly requested the records for results of the Tetra referendum and the 2015 board election. RA records show there was a 33 percent turnout — 5,676 ballots were returned out of a possible 17,511 — which narrowly passed the referendum to purchase the old Reston Visitors Center for $2.6 million. The purchase closed in July.

Flashman said knowing who votes saves future candidates time and effort, and that the voting records should be public because “this is not a private corporation; this is a membership corporation.” He later said he wanted to talk to the electorate.

“To anyone who wants to run for the board or in the holding of any referendum, this document is invaluable. Why? Because of all the 20,000+ households there are in Reston, it narrows it down to those who truly are interested in voting and who pay attention to the issues. It doesn’t make any difference what side they’re on, but they pay attention because they took the time to vote.”

The board, which sources say has spent thousands on legal fees for this matter, denied Flashman’s request at that meeting.

Flashman said Wednesday that RA’s proposal is “probably illegal.” He also said he has filed a complaint with the Commonwealth.

“This is an overall part of the lack of transparency that seems to be a part of the RA board,” he said.

The motion to be considered says that individual member voting records shall be kept secret and only aggregate voter turnout statistics shall be released for elections and referenda of the Reston Association.