This is an opinion column from Del. Ken Plum (D), who represents Reston in Virginia’s House of Delegates. It does not reflect the opinion of Reston Now.

Opponents of legislation to prevent gun violence have said for years that current laws on the books should be enforced before new laws were passed, but they quickly changed their minds when Attorney General Mark Herring moved to enforce Virginia’s law on recognizing concealed weapon permits from other states.

At least 25 states have standards for allowing concealed weapons that are less stringent than Virginia, and his ruling would have ended reciprocity with these states.

Representatives of the National Rifle Association (NRA) came to the McAuliffe administration to offer concessions on other gun safety proposals if reciprocity with other states could be reestablished. The gun advocates agreed that they would drop their opposition to voluntary background checks and to taking guns from those for whom a permanent protective order had been issued if reciprocity was restored. 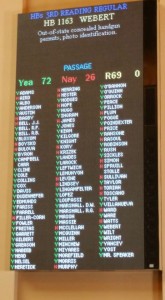 This so-called “deal” between the McAuliffe administration and the NRA will continue to be argued as to who was the winner. The legislation to effect the compromise will be debated by the legislature in the coming weeks. I expect to vote for the voluntary background check bill; even though it is limited, it is at least a small step forward.

A subcommittee of the Militia, Police, and Public Safety Committee defeated my bill that would have closed the gun show loophole by requiring a background check for all gun sales at gun shows. Under the compromise bill, a state police officer will be at all gun shows to do a voluntary background check on sales that do not include a licensed gun show dealer.

I will also vote for the bill that will take guns from those against whom a permanent protective order has been issued. While this bill is part of the deal, it needs to be expanded to include temporary and emergency protective orders.

I will not vote for a bill that surrenders Virginia’s right to set its own standards for issuing concealed weapon permits. While the NRA clearly favors expanded concealed weapon laws across the states, I do not think it is in the best public safety interest to recognize concealed weapon permits from states with limited standards including those that will issue such permits to convicted felons. I commend Attorney General Mark Herring for the courageous position he has taken on this issue, and I will continue to support him.

Working together across party lines is important to the legislative process. The deal before the General Assembly on preventing gun violence has been described as a small, modest improvement.

As I made clear in a speech on the floor of the House of Delegates, I view this as just a beginning. As the advocates with whom I participate in a vigil at NRA headquarters on the 14th of every month — the anniversary of the Sandy Hook shootings — make clear, we will not forget, and we will continue to work for more common sense gun safety measures.