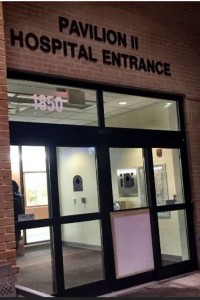 William Brock, 52, of Potomac Falls, was arrested at Inova Fairfax Hospital on Wednesday. He has been charged with destruction of property and shooting into an occupied building, both of which are felonies in Virginia, police said.

Brock remains hospitalized, on no bond and under guard, pending his medical release, at which time he will be transferred to the Fairfax County Adult Detention Center, police said. The firearm was recovered and is being held as evidence.

Brock arrived at Reston Hospital about 1:30 a.m. on Wednesday suffering from a self-inflicted gunshot wound. When he tried to enter the Pavilion portion of the hospital and found the doors locked, as they are at night, he shot out a glass door panel to enter the building.

Brock then entered the hospital and encountered staff, who tried to help with the gunshot wound. As they approached, he  displayed the weapon again and allegedly fired a shot inside the building, police said.

The bullet did not strike anyone and there were no injuries.

Hospital security convinced Brock to put down the weapon, and he complied. He was treated and then taken to Fairfax.

More Stories
Del. Ken Plum: A Debatable Deal on GunsFAA: Drones Can Take to the Sky in Reston Once Again