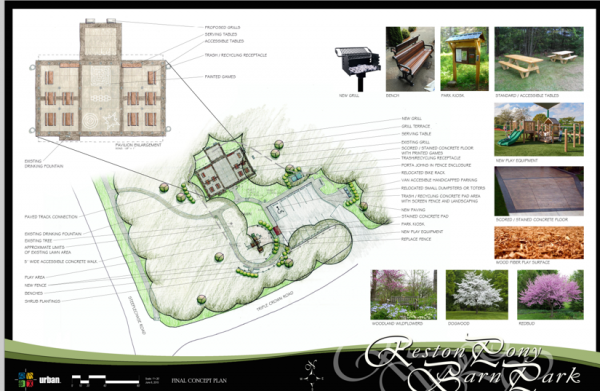 Reston Association set to hire Christopher Consultants to do civil engineering work on the new plans for the Pony Barn Recreation site.

RA recently put out a request for proposals. Four proposals were received and reviewed, it said.

The firm’s tasks will include development of a minor site plan, ensuring ADA compliance for site features, addressing Fairfax County code requirements, and coordinating with the Pony Barn Working Group.

RA says its Design Review Board will consider site plans for the renovations in late spring or early summer before submitting the plans to Fairfax County.

After discussing for over a year what should be done to remodel and repurpose the aging picnic pavilion and surrounding land at Steeplechase Drive and Triple Crown Road, the RA Board approved the renovation plan in July.

The remodeling plan began as an idea to add a concrete floor to the pavilion but in the end morphed into a total remodeling of the small park, including a playground accessible for people with disabilities, a tot lot, a paved pathway, a historical information kiosk, cooking grills and a deck to overlook a butterfly garden.

The makeover has also upped the price tag from $30,000 to about $350,000. Money is available in the capital budget, but RA has said it is also looking into partnerships.

The Pony Barn area was once the site of an actual pony barn in Reston’s early days. It currently has a swing set, a grill, a small parking area, a grassy area and a picnic pavilion with a mulched floor.

RA asked members for ideas at a series of meetings in summer 2014, where the mention of a Memorial Garden of Reflection, endorsed by the Initiative for Public Art Reston (IPAR) caused some friction among citizens.

By late 2014, that idea was tabled, and a Pony Barn Working Group was formed. The group came up with the current proposal.

More Stories
Whatever Happened to Plans for Wine at Reston Starbucks?Thanks to Our Sponsors and Advertisers