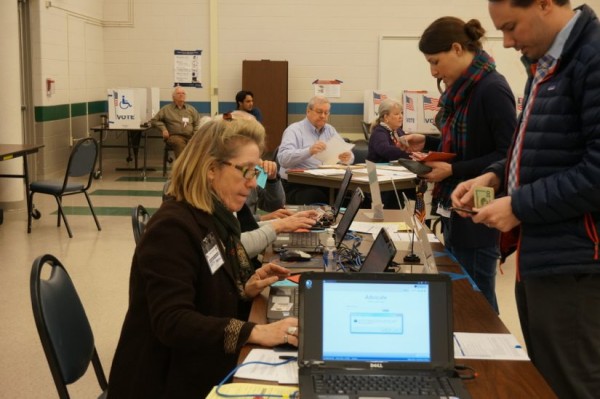 Fairfax County polls opened at 6 a.m. and will be open until 7 p.m. Eleven states, including Virginia, will cast ballots in 2016 Presidential primaries or caucuses today.

A random survey of voters at both polling places, as well as the polling place at Langston Hughes Middle School, showed Restonians are supporting a variety of candidates.

“I voted for Hillary Clinton,” said Reston resident David Ackerman. “She’s about the only adult left in the race.”

Ned Dickert, casting his ballot at SLHS, showed off his blue tie and shirt.

“All blue today,” he said. “I voted for Hillary. I think she will make the best president.”

“He is the most consistent conservative,” she said.

“He seems to me the most adult,” he said. “He doesn’t ridicule anyone and doesn’t engage in the negativity. He is more of a moderate than a conservative. I am most interested in who can govern, We cannot afford eight more years with no government.”

Another voter who did not want to give her name, also said she was tired of the negative campaigning.

“I intended to vote for Marco Rubio,” she said. “But the nastiness turned me into a Ben Carson voter.”

Another voter shouted her support for her candidate: “Trump!” she said. “We’ve had  enough of the global elite establishment. We’re tired of politics as usual.”

Fairfax County election officials have said they expect large crowds today. If you have not voted yet, here is what you need to know:

In Fairfax County, there will be two primaries held in each poll location. Registered voters can vote for either a Democratic candidate or a Republican candidate, but not both. You do not have to be registered by party ahead of time.

The Presidential Primary ballots were printed in advance of absentee voting, which started in January, so ballots will contain names of some candidates no longer in the race.

Here is a Democrat sample ballot.

Here is a Republican sample ballot.

There are several forms of acceptable photo ID:

Not sure where your polling spot is? Visit this online tool on the Fairfax County Board of Elections website.

In Reston, there have been a couple of changes since the last election. The Terraset precinct polling place has been moved to Langston Hughes Middle School. There is also a new district in North Reston. A new precinct at Armstrong Elementary was created by dividing Aldrin and North Point precincts.

Reston Now will have local precinct results when they come in after 7 p.m.