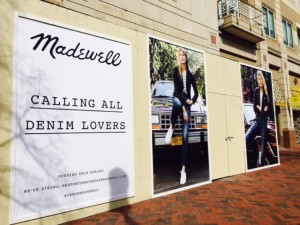 Madewell is opening at Reston Town Center on April 27, but fans of the J Crew-owned jeans and accessories store can get a sneak peek at a special event on Tuesday, April 26.

The grand opening party is from 6 to 8 p.m. at the new store at 11928 Market Street at Reston Town Center.

There will be food and drinks, a DJ, and a complimentary Bien Fait tote with purchase (while supplies last), a store spokeswoman said.

The store officially opens April 26 at 10 a.m. The first 25 people who stop by will get a Madewell gift card.

Madewell is considered a younger, hipper version of J. Crew. Madewell specializes in jeans, leather jackets and totes, and other casual clothes.