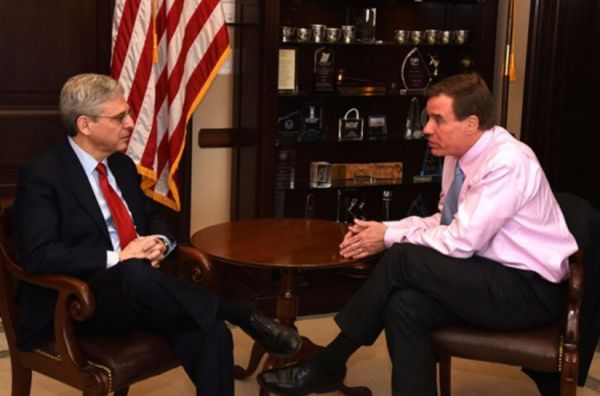 Senate Republicans say that they will not hold hearings or otherwise consider President Obama’s nominee to the U.S. Supreme Court, Merrick Garland.

But Sen. Mark Warner (D-Va.) said Wednesday, after a meeting with Garland, that he’s hopeful Republicans will change their mind. He is pressing for Garland to get “the hearing he deserves,” followed by an up or down vote on his confirmation.

“I have to remain an optimist in this business,” he said. “I hope that public pressure maintains that some of my colleagues will rethink their position and go ahead and hold the hearing.”

Warner didn’t specify what he thinks may finally sway Republicans from their position, that in a presidential year it should fall to the next president to make the nomination to the nation’s highest court. The resolve of those lawmakers is made even stronger given that Garland, who’s widely considered a moderate, would be replacing the late Antonin Scalia, a staunch conservative.

Could the outcome of the presidential nomination process — say, if the general election race turned out to be between Hillary Clinton and Donald Trump — be the turning point?

Warner said he hopes the nomination process can be de-politicized.

“I think it is terribly important that the process proceeds,” he said. “The Constitution is explicitly clear that the president shall nominate. He did his job on March 16 when he nominated Judge Garland, now it’s up to the Senate to advise and consent. I strongly hope that my Republican colleagues will take this out of the realm of politics and do their job.”

“The notion that we’re going to use political gamesmanship about decision-making on the Supreme Court would be a further deterioration of our political process in this country,” Warner added. “That’s not what the country wants.”

ARLnow.com contributed to this story. Photo of Wednesday meeting courtesy of Warner’s office.