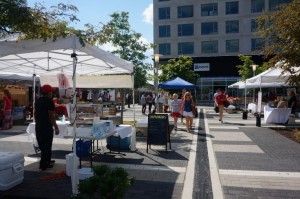 Smart Markets, which operates several area farmers markets, will be in Reston Wednesday afternoons (3 to 7 p.m.) through November. Smart Markets relocated the Reston market to Reston Station, at Wiehle Avenue and Sunset Hill Roads next to the Wiehle-Reston East Metro, last year after several seasons in an office park at Reston Parkway and Sunrise Valley Drive.

Reaction from the community was mixed, though, as some patrons did not like having to park in the parking garage and make their way up to the plaza.

Smart markets says it will have $1 “Market Parking” on Wednesdays. Here is how to access it:

Follow the signs for “Park X” in the Reston Station garage. They are marked with a blue “X.”  You can use your ticket to pay the $1 “Market Only” parking fee at a pay station before returning to your vehicle (if you’ve come in no earlier than 3 P.M. and stayed no more than 60 minutes). The Park X entrances are the first two left turns after entering the garage from Reston Station Boulevard.

Fossil Rock Farm is also offering preordered Community Supported Agriculture (CSA) subscriptions. Boxes of produce and other farm items can be picked up at the Wednesday market in Reston.