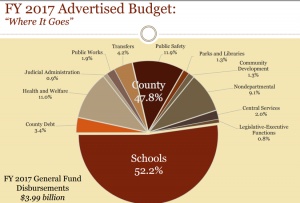 The average Fairfax County homeowner will see a rise of about $300 in his or her annual tax bill next year.

The Fairfax County Board of Supervisors on Tuesday approved its $4.01 billion Fiscal Year 2017 budget. The motion passed 7-3, with Supervisors Herrity (Springfield), Linda Smyth (Providence) and John Cook (Braddock) voting against it.

The supervisors’ vote approves a tax increase of 4 cents per $100 of home value, to $1.13. This will provide an additional $93 million to the county annually.

At a budget mark-up session  last week, the supervisors said they would provide an additional $33.6 million to Fairfax County Public Schools. This was done by allocating an entire penny of the tax rate and using reallocated funds from Third Quarter Review, said Supervisor Chair Sharon Bulova.

The schools had been facing a budget gap of close to $68 million when budget talks began earlier this year. FCPS Superintendent Karen Garza was seeking a 6-percent increase from last year’s county transfer.

In the end, the amount given to schools, which represents 52 percent of the annual county budget, will be about $2 billion, an $88 million increase (4.8 percent) from 2016

“On behalf of the Fairfax County School Board, I want to express my appreciation for the Board of Supervisors’ support of our budget goals for Fiscal Year 2017,” FCPS Board Chair Pat Hynes (Hunter Mill) said in a statement.

“The county’s FY 2017 operating budget, adopted today by a majority of Supervisors, includes the greatest increase in the transfer to the schools in a decade, and reflects a shared commitment to reinvesting in our great school system.”

The school board will vote on its budget on May 26. Hynes said when the board advertised its budget in January it know it was “very hopeful” and that the board needed the funds to “turn the corner after eight years of austerity and begin reinvesting in our great schools.”

“It proposed a basic raise for all employees, a $40 million investment to move teacher salaries closer to market average, new lower caps on elementary class size, and no more cuts to an already strained school system,” she said.

“With today’s vote, the Board of Supervisors joins us in that commitment.,” said Hynes. “We look forward to continuing, deeper collaboration as both boards plan for future needs and challenges, beginning with support for a more diverse and stable revenue base. Continued over-reliance on homeowners’ property taxes is not sustainable.”

Bulova said she gives each annual budget a nickname. This year’s plan is called “a booster shot to ensure our quality of life in Fairfax County,” she said.

“It does infuse additional dollars into our county and especially the school budget,” she said. “This transfer will allow schools to move forward with class size, teacher compensation.”